Cyclin-Dependent Kinase as a Novel Therapeutic Target: An Endless Story


Cyclin-Dependent Kinases (CDKs) are a family of enzymes that, along with their Cyclin partners, play a crucial role in cell cycle regulation at many biological functions such as proliferation, differentiation, DNA repair, and apoptosis. Thus, they are tightly regulated by a number of inhibitory and activating enzymes. Deregulation of these kinases’ activity either by amplification, overexpression or mutation of CDKs or Cyclins leads to uncontrolled proliferation of cancer cells. Hyperactivity of these kinases has been reported in a wide variety of human cancers. Hence, CDKs have been established as one of the most attractive pharmacological targets in the development of promising anticancer drugs. The elucidated structural features and the well-characterized molecular mechanisms of CDKs have been the guide in designing inhibitors to these kinases. Yet, they remain a challenging therapeutic class as they share conserved structure similarity in their active site. Several inhibitors have been discovered from natural sources or identified through high throughput screening and rational drug design approaches. Most of these inhibitors target the ATP binding pocket, therefore, they suffer from a number of limitations. Here, a growing number of ATP noncompetitive peptides and small molecules has been reported. 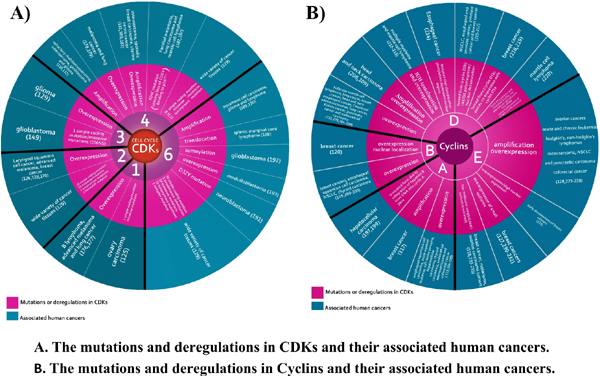