Background: This is a partial replication study of work conducted by high school students in Denmark as part of their science fair project. Objective: The purpose of this study is to determine whether radiation from a Wi-Fi router affects germination and growth of garden cress (Lepidium sativum), broccoli (Brassica oleracea), red clover (Trifolium pratense) and pea (Pisum sativum). Method: One set of seeds was placed in Petri plates in a germination chamber kept under controlled conditions and was exposed to microwave radiation generated by a Wi-Fi router (mean and maximum exposures 20–40 and 96 mW/m2 respectively). The other set of seeds was kept under identical conditions with no Wi-Fi router (reference) and with much lower microwave exposure (0.0001 mW/m2). Seedlings were harvested after one month and biomass (dry weight) was recorded. Results: The radiation from the Wi-Fi router did not affect germination of any of the species tested. However, there was a significant reduction in dry weight of the broccoli (86% of control) and peas (43% of control) exposed to Wi-Fi radiation at the end of the experiment (p<0.01). Wi-Fi exposure inhibited root growth of several species. It also caused root tips to turn brown and reduced root hairs of cress compared with the reference treatment. Broccoli seedlings closest to the Wi-Fi router grew away from the router; cress seedlings had larger leaves and were chlorotic compared with controls. Several small plants began to die and mould developed in those Petri plates. Conclusions: Radiation from Wi-Fi reduces root and shoot growth, contributes to chlorosis, alters size of leaves, and reduces fine root hairs in several on the species tested. Radiation generated by a Wi-Fi router, at levels well below international guidelines for microwave radiation, adversely affects plant growth and may interfere with a plant’s ability to protect itself from opportunistic mould. 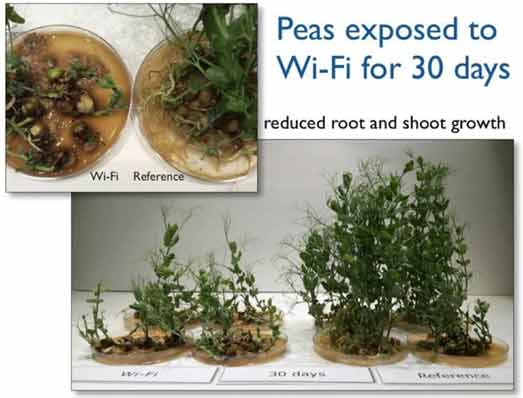